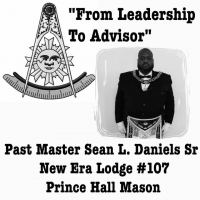 On this day in 1899, our Prince Hall Grand Chapter O.E.S, was formed in the harbor of Savannah Ga during the mist of Hurricane San Ciriaco. The first Chapter was organized in Savannah in 1898 under the Jurisdiction of of the Grand Chapter of Washington D.C.

Wasn’t unit around the mid 1950’s during PGM Dobbs tenure when the Joint Grand Communications began.

It looks like you're new here. If you want to get involved, click one of these buttons!